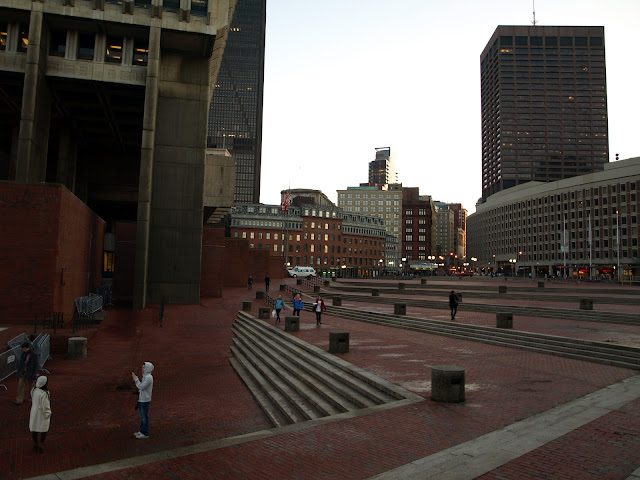 this was last week, a view of the brick desert, about which i wrote before. to the left is the city hall (behind the 2 people in white). this is only part of the brick desert, its perhaps twice as big as you can see here... ? i like the 2 buildings further back, which are both round, like the road (what was there first? the road or the buildings? i guess the road). if you take that street, you will eventually reach the boston common and park street. when i took this photo, it was a little chilly, but today it was very sunny and rather warm again. i was very much in the mood for an ice cream, but the closest provider (mc donalds in this case; i like their sundaes with caramel!), did not have any! buuuhhh. then we went to the lab where they have an ice cream vending machine (never saw that before), but it only took dollar bills, which we did not have. i was very disappointed. perhaps the universe was trying to tell me that i should not eat unhealthy stuff... hmppf.
summertime started here. that was kind of a surprise, an hour less! actually, they dont call it summertime in america. in proper english they do, and in dutch ("zomertijd"), but in american english they call it "daylight saving time". whatever, i like summertime so much better! now if i only could have had that ice cream...
Tweet
Pin It
Labels: boston sightseeing, boston streets, frustration, people photographing, photographing strangers, posing
Posted by CaT at 11:37 PM

Don't know if I should tell you, but there's ice cream in walking distance: check the Cellar, no soft serve though...

It is a huge stone desert which make the people look very small. Funny they have another word for "zomertijd". Here we still have wintertime although it feels like spring now.

summertime, and the living is easy.

I agree with you about the "brick desert". Surely they could have planted some trees amongst all that brick paving?
I like your composition in this one!