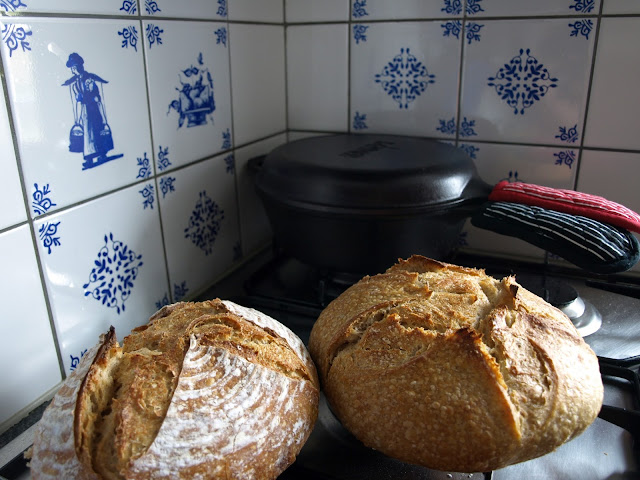 i tried baking sourdough bread a bit since i am back in the netherlands, but the first time was a total disaster (too much water for the flours here, they take up much less water!! so i had some weird, huge flat disk instead of a bread). then i just made simple breads with commercial yeast (and bought croissants, haha), but last week with all our stuff from the USA also my dutch oven arrived, that you can see here in the back (i got it from tim for my birthday last year), so it was really time for baking bread!! to get a nice bread you need to create some steam in the oven. this is to keep the dough moist and supple so that it can rise in the oven as much as possible (the cracks you see here were just cuts i made in the dough before putting it in the oven, then the yeast makes the bread rise and the cuts bloom open). to create steam you can put a tray of hot water underneath the loaf, but the easiest is actually just throwing the bread into the dutch oven. the enclosed compartment creates a steamy environment and without any effort the bread does what it should..... jaaajj!! i was so happy when they came out of the oven. the only frustration is that the ovens here are so very tiny... :( in the usa i could bake 2 loafs at the same time, but here only one fits, grrrrrr... the oven being so tiny also made it quite a hassle to get the hot pot in and out of the oven, i of course managed to burn my hand (luckily not too bad).
i just looked up why a dutch oven is called a dutch oven, and that was quite interesting! in the late 17th century, the dutch were just very good at making these pots. the brits liked them, imported them and called them dutch ovens. then the immigrants brought them to the us, and the name stayed. the settlers just loved the durability and versatility of the pots, and they became so valuable that people often put in their will what was to happen with their dutch ovens after their death!! wikipedia also tells me that the dutch oven is the official state cooking pot of texas, utah and arkansas... whatever that may mean...
ah, and dont you love our "delfts blue" tiles? i think they are amaaaazing! very fake ofcourse, just adhesive tile stickers that i bought somewhere on sale, but i think they instantly made our kitchen look so much better!
Tweet
Pin It
Labels: bread, home, the netherlands
Posted by CaT at 7:11 PM

Hurray! You are a champion bread baker. It looks great and I am sure it tastes great, too. I know nothing about baking, since I don't cook, but I (mostly) followed that explanation.

And, the Delft tiles do look good. You are settling in . . .

Your bread looks fabulous - and I should know. San Francisco sourdough is famous and I grew up eating the real thing.

Thank you for the Dutch oven education. I didn't know a thing about them, or that they'd be great for baking, or that your oven would be so tiny.

I would have thought your tile authentic if you hadn't copped to the stickers. They look great.

That looks great, ready to bite in. The tiles I hadn't thought they were not real Delft blue. Funny those stickers. Had never heard about a Dutch oven before, was new to me.

You are a master baker! I have a cast iron frying pan (huge) that I love using for all kinds of food. Now I need to check it out for bread. Care to share the recipe??